Leave a comment
By musingsonmatters life the universe and everything, sport

It was 10 past 10 on the 7th of May 2019, the Liverpool manager looks down at his wristwatch and then says… 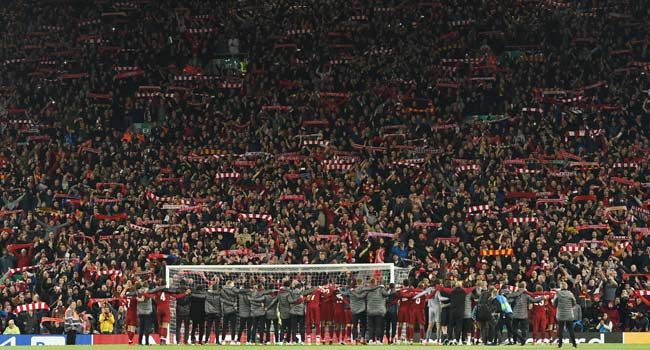 He’d just watched, as had I, his Liverpool team knock Barcelona, lauded by many as the best team in the world, out of the Champion’s League.  But it was more than that. Liverpool had been beaten 3-0 in Barcelona the week before and most, if not all, of the pundits thought the team was on a hiding to nothing.  I’ll be honest I felt Jurgen might have been right the day before the game when he said that they would try to win the game but if they didn’t they would “fail beautifully” – but how wrong we all were.

I still haven’t seen the first half, I was at a Parish Council meeting where people seemed to be taking an age to say something when a few words would have sufficed.  I’d kept informed about the scoreline via my phone and before the second half began I gave my apologies and left.  I’m so glad I did!  What a game!  I could try to describe it but why bother when Jonathan Liew in the Independent has already crafted a superb tribute to an amazing game.

An Anfield miracle transcribed from the pages of pure fantasy @jonathanliew independent.co.uk/sport/football…

All I can tell you is that when the final whistle blew I left to my feet, my arms raised to the sky and let out a bellowed “Yesss!!!”.  I was literally shaking, my heart racing – it was incredibly difficult to type WhatsApp messages to my son and my partner. As expected my son is instantly asking if we can go to Madrid.  He’d wanted tickets to last night’s game but the only one’s I could find were into 4 figures!  Madrid tickets are apparently twice as much, and more, and frankly I cannot imagine that the atmosphere in Madrid will be anywhere near as amazing as it was last night at Anfield.  I’m fortunate enough to have seen a number of matches there (not as many as I’d like – but that’s the problem with a popular team and a shoddy ticketing system) and even Saturday afternoon games with the crowd singing create a magical atmosphere – so I can only imagine what last night was like to actually be there – in the stadium…

So when, after the game Jurgen drops the “F bomb” I’m with Gary Lineker who, on BT Sport, refused to apologise for it being broadcast.

“I’ve been asked to apologise on behalf – But I’m not going to. He’s perfectly entitled to say that. He can get away with that, it’s after the watershed. Well done Jürgen.”

We are Liverpool – this means more.